When we walked outside to ride over to her dad’s penthouse, it started raining.

“Oh,” Lexie said, not running toward my waiting limo like most girls would.

“What are you doing?” I asked. “We’re getting soaked.”

She put her arms out and danced. “Isn’t a good summer rain the best? I love feeling the plink of sprinkles on my face.” 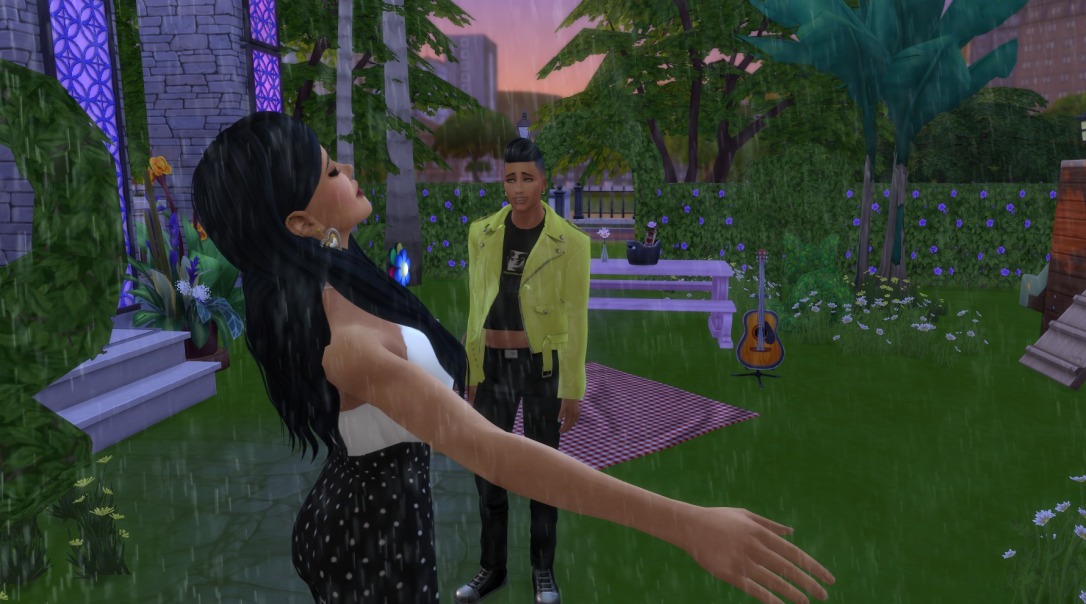 Lexie Day was something special. Unlike any girl I’d ever met. I figured that from the moment I waltzed into her room and she’d clung to my leg, feverishly begging me to stay.  Living with her was a trip, too. But here with me on this date, she was even more unique. So full of life and energy and spark.

Dancing with her in the rain was a moment I’d never forget. I realized then all too painfully I wanted her to be my girl. Forever.

I got a kick out of how Beau and Ronan’s wife, Peaches (her real name was Sunday Peach, but we just called her Peaches), were giving their predictions on how this night would go with teen dream James Sanderson. I can’t lie. When Ethan told us Lexie was dating him, I didn’t believe him. I thought Silas was pulling his normal shit (the dude was such a little worm as a kid and I wouldn’t trust the guy with a pair of old socks). My daughter always rocked to a different tune. Not saying that’s bad, but I would have guessed a punk frontman over some bubblegum fantasy pretty boy like James. He just didn’t seem her type at all.

“You’re so wrong, Miss Peach,” Beau countered. He loved to argue with Peaches.  “James will cower in fear when he meets August. The guy is like, what, five foot nine? Hell, August intimidates me sometimes.”

“What do you think, babe?” Peaches turned to Ronan, rubbing her burgeoning belly. She was due in a few months with their first child. “Totally know James is gonna blow us all out with his style. He’s not going to give a rat’s ass about impressing Daddy-A over here either. Daddy-B on the other hand…I bet he gives Beau a run for his money on diva.”

I had to stifle a laugh. Oh, she knew how to push Beau’s buttons. Ronan, like a good husband, just shrugged and stayed out of it.

“Diva?” Beau sputtered. “If you want to see diva, honey, it’s on. But no. If he shows his diva self here, we’ll give him the boot. A guy knows this. He’ll be on his best behavior. You watch.” They bantered for a while until Ronan got thirsty. He nodded at me toward our bar and I kissed Beau’s ear and mumbled, “Let’s get some drinks, baby.”

“So, you haven’t said a word about this, August,” Beau said once he dropped down on a bar stool. “What’s your opinion about James?” I shrugged. “I just want him to make Lexie happy. Beyond that, I don’t care much.”

Beau swirled his glass. “We’re in agreement on that. He’d better damn sure make her happy or he’ll have to go through us.” Lexie had talked about her mom and dad a lot when I lived with her as Jenny. Said her father was the toughest guy she knew. At six foot five, he towered over most people and was an FBI agent. To say I was intimidated was an understatement. And now, meeting him in person, the guy seemed even bigger.

“Yo,” I muttered. What the hell was I doing? Yo? He was going to think I was some punkass kid. Then he stuck out his hand. “Welcome to our home.”

“Thanks,” I said, recovering and feeling a little more at ease.

“We’re happy to have you, James. We’re all big fans of The Heartthrobs,” her uncle said. “Aren’t we, Bray Bray?”

The little boy just bobbled his head up and down.

Lexie’s Dad added, “I hope you don’t mind meeting most of Lexie’s relatives all at once.”

He clapped me on the arm and said, “Call me August.”

I followed Lexie into the living room where she introduced me to everyone. Her mother was the most striking woman–looking almost exactly like Lexie.

“I see where Lexie gets her beauty. ” I said. “Before you get any ideas, she’s taken.” A handsome blonde man wrapped his arm around her possessively.

Lexie and I both laughed.

For the next half hour, Lex and I chatted with her family. Everything went well. I’d noticed all the Llama Kings stuff around and had asked about that. I never knew Lexie was related to the legendary lead singer, Jackson Day. But I should have guessed since her dad looked just like him.

All through that night, in the back of my mind, I wondered when I was going to tell Lexie about my secret. Her family was so nice. I couldn’t say anything her there. I’d decided I’d reveal who Jenny was when I brought her home.

The scent of charred beef made my mouth water as my stomach growled. “Mmm…what’s cooking on the grill?” I asked.

“Oh…uh…” Damn. I’d forgotten I was supposed to be vegan.

Lexie laughed and interjected, “He loves the scent of meat even though he chooses not to eat it.”

I shook my head at her. She was almost as good at lying as I was. “Yeah…makes my mouth water and everything,” I said, wistfully. It smelled like steak–my favorite food.

“But you can’t eat it!” she teased. “Barbeque tofu for you, James.”

I could tell my family adored James. This date was going great. A little too great. How was I going to tell everyone we broke up when they were planning our wedding in their twisted little minds? I saw the look on my mother’s face. He’d wrapped himself around her pinky and it was going to be hard to rip him off.

I had to admit it, though. His charms were starting to rub off on me, too. It was like I’d known him for a long time. And he wasn’t the jerk off diva the press had made him out to be. He was as down to earth as his sister but waaaay more sexy. Now I understood why he was the favorite Heartthrob. Those eyes! They melted me into Lexie puddles all night.

After dinner, we walked outside to get some fresh air and to mingle with my parents’ friends.

“Well, if it isn’t the Heartthrob love birds,” Silas’ father taunted us. “So my son says if he had to lose Lexie to someone, the biggest boyband lead singer wasn’t too shabby.”

Eyeroll incoming! Silas didn’t lose to James. He just lost. I forced the fakest smile, trying not to gag.

James laughed and said, “He made a formidable opponent. I liked him very much when I met him.”

Aw. James was so sweet. Lying for me like that. Jenny met him not James, but he was so good at covering for me tonight.

“Hey, Lexie,” Uncle Darius said. “Why don’t you show James the music room. Since he’s a Llama Kings fan, I bet he’d like to see it.”

“I’d be down for that,” James said, nudging me and flashing a heart-stopping grin. “Could I see it, Lexie?”

What was this? Did Jenny conspire with my uncle to get James alone with me? And although I didn’t want this, butterflies were having a field day in my stomach anyway. “Oh…okay,” I relented. “Follow me.”

Our shoes clicked on the metal stairs as we made our way to the third floor.

When we entered, James instantly whistled. “This is so cool! I can’t believe Jackson Day was your great grandfather. Why didn’t you ever tell me?” I cocked my head. “Probably because I’ve only known you for like, what? Six hours?”

He chuckled nervously then asked, “D-Do you play anything?”

“Then play something for me.”

“What? You’ve got to. We can’t let this goldmine of Llama King guitars go to waste.”

The butterflies turned into nervous gnats. “Um…I’ve never played for anyone other than my family before and that someone is definitely not going to be a lead singer of some huge band. No. Uh uh.”

He put his hands together and said, “Please? I’ll sing along with you. I mean…how many girls can say they got me, THE James Sanderson, to sing just for them?”

I pushed him, giving him my stink eye. “Alright…pompous ass does not look good on you. But…since I feel generous today and since I want to see if you can really sing and it’s not all autotune, I’ll agree.”

We decided on one of my great grandfather’s ballads that both of us knew. It had an acoustic melody and was fairly easy to play. James’ voice was so rich and true. He definitely didn’t need autotune. I was blown away by his talent.

The song was a haunting melody about lost love–something my poor great grandfather struggled with. It was well known that my grandmother’s mom was a bonfide bitch, cheating on him and ripping apart her family. My grandmother never spoke to her mother again after her father killed himself. Such a tragic life that ended so early. But my grandmother’s life was the exact opposite. Thankfully, our family wasn’t cursed from its notorious past.

I came into the middle of the song and harmonized with James. The notes seemed to bond our voices together as the crescendo shivered over us.

When it ended, James’ eyes held tears. “Wow. That was…”

Bending down, he finished his sentence, “Breathtaking.” Then he kissed my hand. Normally, I’d have a sassy comeback to anything that remotely hinted at sap, but instead, I gazed at his perfect face and did a full on fangirl swoon inside.

Pulling me toward him, he looked almost sad.

His face scared me for some reason. “Are you okay, James? You don’t want to puke or anything, do you?”

He gripped my hands tightly and said, “I…um…” He looked down for a moment, then gazed intensely into my eyes. “I-I have something I need to tell you, baby doll. But first…”

He grabbed the sides of my face gently in his hands then before I knew it, he was kissing me.

As our kiss deepened, my hands started moving to his neck then through his hair. Our breath grew faster, more ragged and urgent. Then suddenly, my mind caught up with my body and it slammed me. Hard.

I stopped, pulling back.

Blinking, it was as if someone painfully ripped off masking tape that had been covering my eyes.

I saw it now. Everything. His face. The way he smelled. His eyes. How he spoke. The tiny mole on the side of his neck. How he knew so much about me and how easily we got along.